People of Galekey's Bortania village in Nazira Sub division in Upper Assam are still affraid of the gas leakage incident at ONGC's  Rig No-E 2005 GK GL Well. This incident happened at 5 PM on June 12 and with a huge sound and polluting the air up to  2 kilometers. Although the crisis management team of ONGC immediately controlled the situation, local people demand for proper compensation. A public meeting were held in this are on Friday in this regard where SDPO of Nazira Ashif Ahmed, AK Kumar GGM of Drilling section of the ONGC, Kashyap Joshipura, Manager Corporate Communication of ONGC etc. were present alongwith other dignatories. 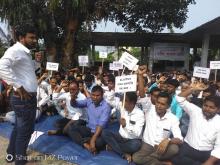 21 Nov 2019 - 9:52am | AT Kokrajhar Bureau
KOKRAJHAR:  A two-hour sit-in-protest dharna was staged on Wednesday at children park near DC office demanding  justice to the Lafikul Islam Ahmed murder case, and stopping increased...

Straight from the House: AGP set to bring adjournment motion

4 Mar 2008 - 2:46am | editor
The Opposition Asom Gana Parishad is all set to move an adjournment motion as soon as the Assam Assembly session begins it’s second pay proceedings. According to information, the main...