Police on Thursday have picked up three people in connection with the killing of a correspondent of the Asomiya Pratidin Muslimuddin on April 1. The arrested people have been identified as Qutubur Rahman, Mohammed Tuta Miyan and Mohhamed Joynul Haque.

Muslimuddin, a correspondent of the vernacular daily was killed with lethal weapons by a some miscreants for a series of reports that he had filed about anti-social and criminal activities in the Morajhar area of Hojai sub-division on April 1.

He died on Wednesday morning while he was rushed to Guwahati with injuries. Muslimuddin was on his way on a bicycle from Morajhar bazaar to his residence at Barpukhuri, when the group, numbering about six persons.

13 May 2008 - 8:23pm | editor
Altogether 14 people have been injured, four them seriously, when a fast moving passenger bus collided head on with an auto van near BH College area in Assam's Barpeta district on Tuesday morning.... 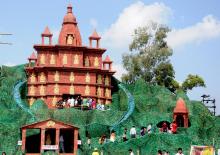 22 Oct 2015 - 10:30pm | AT News
A heavy rush of devotees and visitors has forced the Durga Puja organizers at Latashil playground in Guwahati to hasten the immersion process on Thursday morning fearing a rerun of the Deshopriya...
Follow @Assam Times