A group of six ethnic communities are hunkering down with the Centre on Thursday in New Delhi to arrive at a conclusion on the ST status.

Accompanied by Union sports minister Sarbanadan Sonowal,  tribal affairs minister Jural Ornam talked to the ethnic leaders at 11 in the morning which ended at 1 in the afternoon.

The ethnic leaders remained firm on their demands while the Union ministers assured them of steps to ensure ST status for six communities. The meeting assumes significance amid an escalating demand from the existing ST people to stop the move.

The ethnic leader are scheduled to meet Union home minister Rajnath Singh in the evening.

2 Jan 2013 - 5:34pm | Dibya J Borthakur
The assistant manager of the Amsoi Tea estate Pankajesh Garaip was arrested on Wednesdayat around 11.45 a.m by police for allegedly beating up a guard of the Tea garden named Durgeswar Tanti on...

2 Feb 2020 - 2:43pm | AT News
Several organisations including the ASDC have jointly organised a protest against Citizenship Amendment Act, 2019 at Diphu on February 3, 2020. In a press release the organistions appealed the... 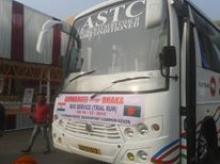 10 Dec 2014 - 9:22pm | AT News
After years of will-it-won’t-it, Guwahati resumed the bus service to Dhaka on Wednesday. PWD minister Ajanta Neog flagged off the bus on trial run to the neighbouring country at a brief function in...
Follow @Assam Times