Assam agitation back with bang!

A group of AGP ideologues are on a day long dharna in New Delhi on Friday demanding an immediate halt in the move to shelter the non Muslim Bangladeshi and Pakistani intruders.

Led by AGP leader and former chief minister Prafulla Kumar Mahanta, around 50 people started staging sit in at the Jantar Mantar at 10 in the morning shouting slogans against the NDA government’s recent notification.

Talking to reporters, the protesters unanimously said that they won’t allow the Centre to impose Bangladeshi and Pakistani immigrants iin Assam. “We won’t allow it. We will intensify a nationwide strike if the Narendra Modi government refuses to restrain,” said a protestor.

Former Chief Minister PK Mahanta said,”we must ensure that the Assam Accord is implemented in letter and spirit. We won’t bear any extra burden of Bangladeshi refugees. Assam has suffered a lot. Is it not an abode for rehabilitation of immigrants.”

Mahanta and his team has already met President Pranab Mukherjee and vice president Hamid Ansari asking for their intervention during the last two days. 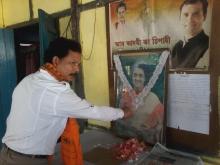 15 Dec 2007 - 10:50am | editor
The All Assam Koch Rajbanshi Students Union has withdrawn the proposed 1000 hour Kamatapur bandh from Monday following the permission they received for staging hunger strike in the city. But the...