Women in the region of Northeast India are excluded from decision making structures and are discriminated due to cultural, patriarchal structure and customary laws. Northeast India currently has seventeen peace talks but no women in these peace talks. In 2014 general election, only 62 females have been elected constituting more than 11% share in the 16th Lok Sabha. Of the total of 466 seats in the assemblies of eight northeastern states, only 24 (5.15 percent) are women. Of the 60-member assembly in Arunachal Pradesh and Manipur, there are two and three female legislators respectively. Assam has 14 women MLAs among 126 elected representatives while Tripura has five women lawmakers in the 60-member house.

Women leaders across the eight states of Northeast India and youth survivors of violence congregated on 24 & 25 August 2016 at Second Northeast India Women Peace Congregation in Guwahati, Assam for consultative meetings on ensuring absolute participation of women in peace process, peace talks and decision making forums, ensuring protection of violation of women rights in conflict for bringing the much needed peace and development in the region.

In the words of the Convener of this historic women peace congregation, Binalakshmi Nepram, “Northeast India Women Peace Congregation is a historic event which brings together women leaders from all across Northeast India. These remarkable women through their words, deeds and action will bring the much needed peace in the Northeast Region. Speaking at the historic event, Roshmi Goswami, Chairperson, FST highlighted the significance of UNSCR 1325 and CEDAW and stated that government needs to value women as peace builders and support the cause is necessary for it to work well. She added, “A National Action Plan on Women Peace and Security will only works if there is a commitment of resources and a reasonable budgetary allocation by the Government".

“Women from 8 states converged here to find ways for peace and sharing experiences and stories with each other and I hope this will bring sustainable peace in the region” said Neha Naqvi, Project Coordinator, Welthungerhilfe.

Neidonuo Angami, Founder Member, Naga Mother’s Association shared personal stories of the inception of Naga Mothers and their struggle and achievement in bringing peace in Nagaland. She said throughout their journey they have received immense support from to society.  Lourembam Nganbi, Meira Paibi Leader from Manipur, narrated the inspiring movement of Meira Paibi of Manipuri women for fighting human rights violation in Manipur. Further she said, “Women’s participation in peace building is very high but decision making is quite low and negligible in Manipur. Only 5% of MLAs are women. Manipuri society is still male dominated. Women have many qualities which are suppressed by men & hence importance of having women in decision making".

Rose Mangshi, President, Kuki Women Union spoke on the role played by women of Manipur in bringing peace in Manipur during ethnic clashes and divide in Manipur. She said, “In such darkest times, women in Manipur came in solidarity for discussions dialogues and reconciliation to bring peace in Manipur.” Prof Lalneihzovi, Mizoram University stated that women in Mizoram are developed but not empowered as the participation of women in decision making foruis negligible and the need for proper reservation of women in such foruShe said, due to lack of accountable mechanism women and gender issues are not seen at central policy level to include women in peace and security process. So unless and until political leaders will show positive approach towards women’s issues situation will not change.

Pratibha Brahma, Member of North East Research & Social Work Networking (NERSWN), Bodoland, Assam shared her contribution on how women of Bodoland work together in reduction Gender Based Violence and Peace Building in Conflict Situation in the region.

Tanushree Hazarika, Managing Director of Eclectic Group said; “Peace and empowerment are directly co-related. When there is peace, there is better environment for women to pursue their goals. Women in India form a minuscule percentage of legislators and bureaucrats. So, this kind of programmes can play a big role in bridging that gap”.

Kanchan Sinha, working for government of Tripura; mentioned about crime against women in Tripura and said that as per official report crime against women is 88% in Tripura. The common phenomenon is to blame victifor rape.  Incidents like Nirbhaya take place in Tripura on every alternate month. Practice of killing women in the name of witchcraft is very common. Jaynie Sangma, a social activist from Garo Hills, Meghalaya narrated horrifying tales of police atrocities towards innocent civilian in Garo Hills. She told that she was jailed there for two and half months along with her husband and son and her son’s friend was also killed in judicial custody.

Parvati Thausen, a resilient woman from Dima Hasao, Assam told that she has faced gender discrimination since her birth and had taken strong initiatives to fight against women rights violation. She took active part in women led peace and conflict transformation with warring ethnic communities in Dima Hasao District of Assam. Sitara Begum, Muslim Women Leader from Manipur, in her statement said that all women present in the room are leaders. She said that women have to come out in the physical sphere. Education of women is equally important. Finally she said everyone has to walk together for all round development; Speaking on the present status of women in Sikkim and the need for participation of women in decision making, Deyang Dolkar Gyatso, President, Bikstang Heritage, Sikkim, highlighted the emergence of girl’s education in Sikkim and stressed on the urgent need for women to come to the forefront in the decision making process to make progress in the society.

Rosanna Lyngdoh, Impulse NGO, speaking on human trafficking she told that around 80 percent of trafficking is done for sexual purposes and rest of for bonded labour and India is the hub for the trafficking. In the region of Northeast India, we share international borders with Bangladesh, China, Nepal, Myanmar and Bhutan. These are the source of transit and destination point. The region is facing lot of conflicts everyday and due to these women and girls are trafficked every day. To combat trafficking, there is need to work together whether it is government agencies, civil societies, or media houses.

Rebina Subba, Member, State Women Commission Meghalaya emphasized on the need for formulation of state specific action plan on women peace and security. Sabrina Iqbal said that Assames Muslim women are not seen in public spheres or peace and negotiable process just because of power sharing. She also added that men don’t want to women in decision making or formal politics and deliberately they oppose women to be in such kind of forum. She emphasized religion has been used a convenient tool to subjugating women. Sangeeta Baruah, senior journalist, shared that this is very wrong that national media does not cover enough stories from remote areas of Northeast India related to women issue.

Agnes Kharshing, President, Civil Society Women, Meghalaya, said that the state is responsible to end violence against women but state is not doing this. Crimes against women are everywhere in Northeast India.  The women empowerment is the need of the hour and it can be done together by supporting each other.

Aminul Islam, MLA, Dhing, said that it is the duty of men to ensure women’s rights and security. ‘When we hear instances of brutality against women, we feel embarrassed. In the eyes of Allah, all men and women are equal’ he said. Ravikant Singh, President of Doctors for You spoke about how the dangers against women and girls during disaster can be mitigated. Dr. Samrat Sinha, Associate Professor, Jindal School of International Affairs emphasis on the need for children’s agenda on National Action Plan on Women Peace and Security. A young survivor of violence, Sandeep B Sangma, an engineering student from Garo Hill, Meghalaya testified for the first time on how he was assaulted and framed by police. There was also the harrowing story of Archana, a woman who had lost her son in a bomb blast in Gossaigaon, Kokrajhar, spoke about how people in Northeast India get less compensation compared to other parts of India.

The event saw participation of over 200 participants including policy makers and government officer, women and youth survivors of violence, academicians and journalists.  The Citizen’s National Action Plan that was developed and submitted to Union Minister of State for Home Affairs Kiren Rijiju in September 2015 was released on that day by the women leaders and a Policy Briefing on Women in decision making.

A 20 point Resolution was adopted known as “Assam Declaration” for Women Peace and Security at the two day Peace Congregation held on 24th and 25th August 2016:

The congregation acknowledged that 272 ethnic communities comprising of 40 million people live in the 8 states of Northeast India;

The event was convened by Control ArFoundation of India in collaboration with Manipur Women Gun Survivors Network (MWGSN) and local partners such as Char and Rural Development Society, Doctors for You and Northeast India Women Initiative for Peace with support from EU and WHH. We are very thankful to our partners who supported us for this event. Please find some attached photographs of the event. Kindly give credit to CAFI archive. 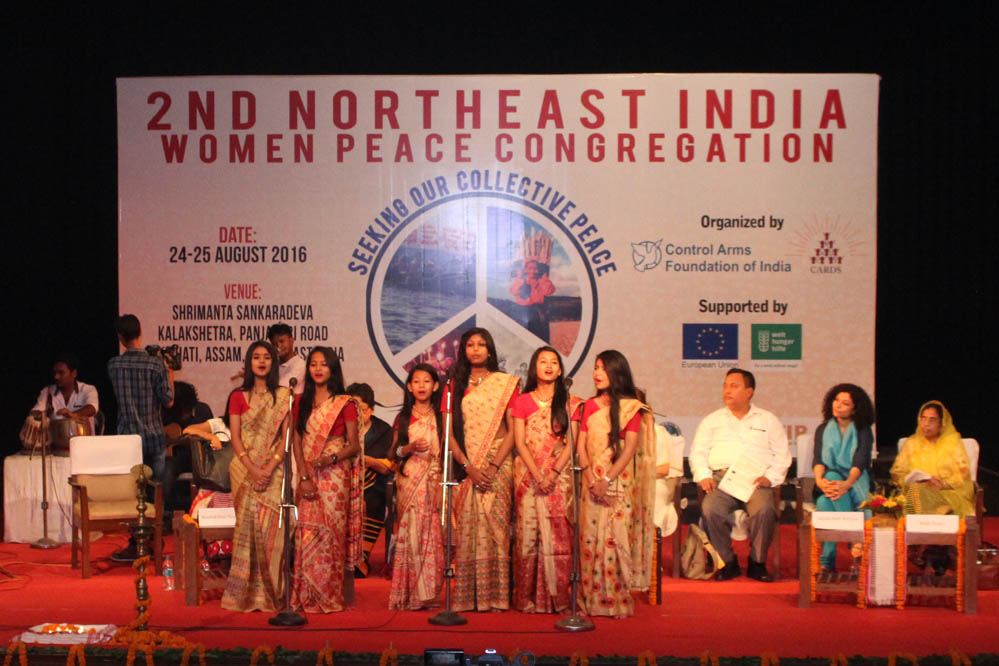 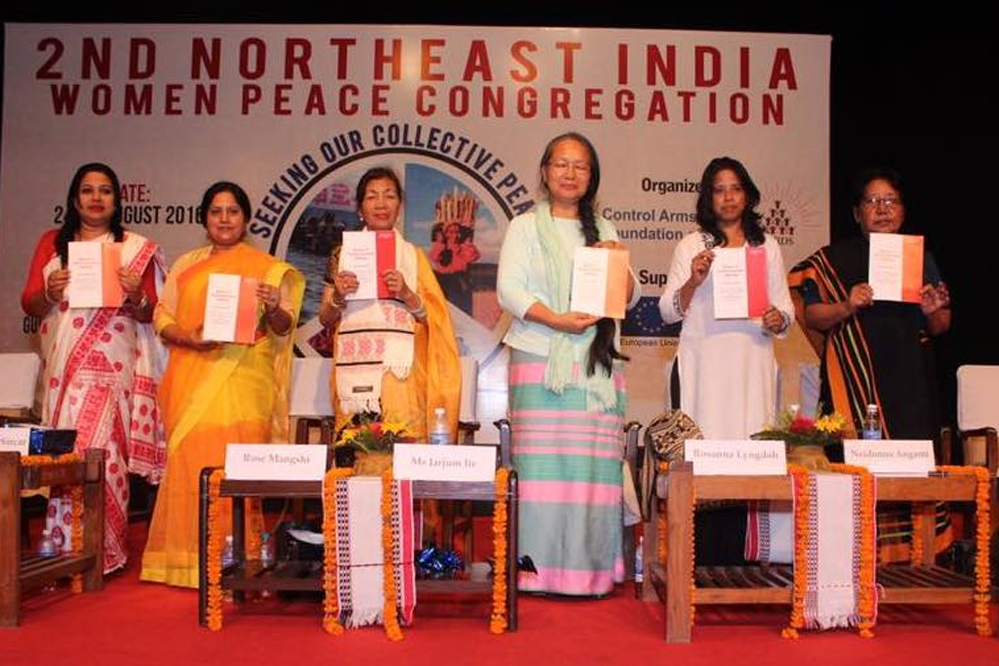 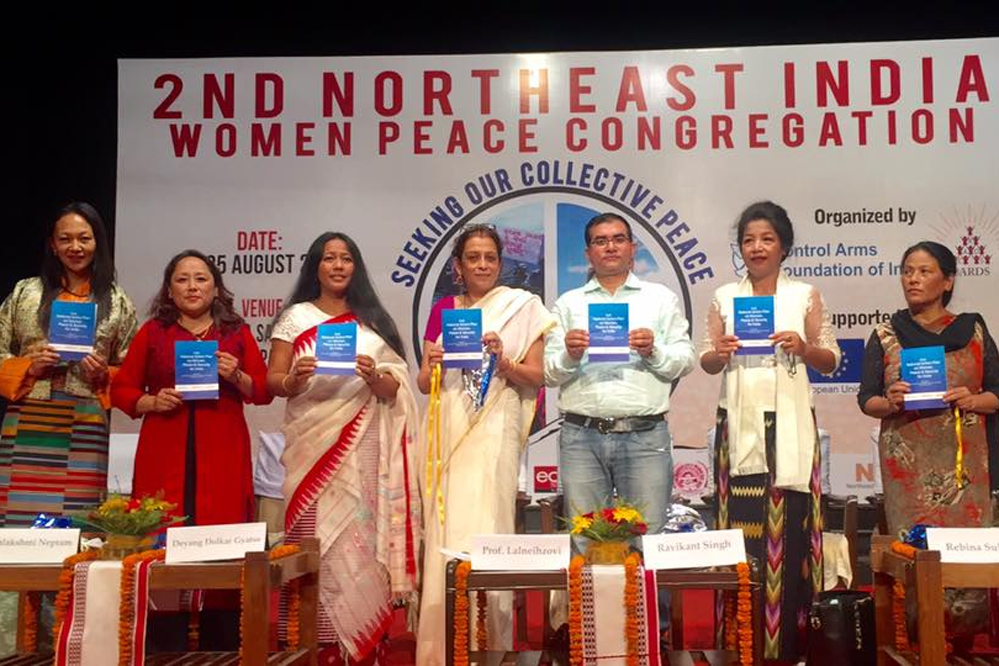 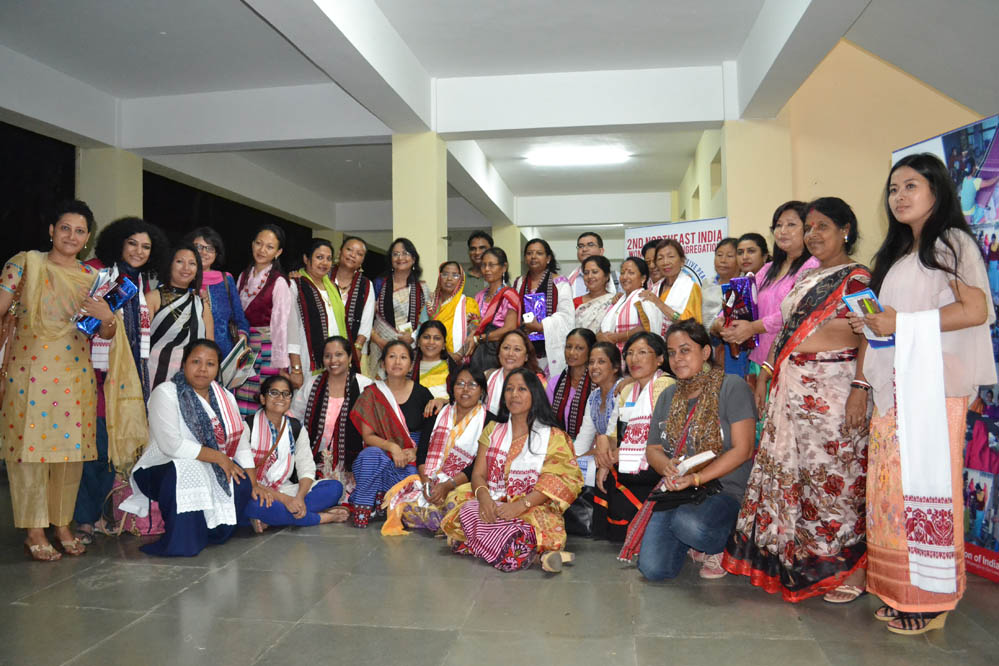 Naidu lashes out a Cong

12 Mar 2014 - 2:52pm | AT News
Former BJP president M Venkiah Naidu said that BJP will be able to form the government at the Centre after gaining absolute majority in the upcoming Lok Sabha polls.Addressing a press conference in...

12 Jan 2010 - 4:33am | ThaneswarHazarika
Ajanta Neog. PWD minister of Assam inaugurated the newly constructed RCC bridge over the Gelabeel on January 11. The minister in her speech hoped that the bridge would help communication to interior...

31 May 2008 - 2:53pm | editor
Assam Chief Minister Tarun Gogoi's convoy passes the new flyover at Bhangagarh for public use after the inaugural ceremony in Guwahati on 30-05-08. The flyover which took more than 3 years is the one...
Follow @Assam Times