The recovery of the dead bodies of one boy and a girl on railway tracks near Harisinga railway station in Udalguri district on June 12 has created sensation in the district.Police has identified the bodies as of Ajay Chouhan (17) son of Indradeb Chouhan,resident of Nalbari ward of Udalguri town and Dilandiata Das (15), daughter of Pradip Das of Sundaridiya patti of Udalguri town.Both the boy and the girl had been missing from respective houses since June 10.Unable to trace the students,parents of both the families had filed FIR at Udalguri police station yesterday on June 11.Information revealed that Ajay Chouhan had appeared in the HSLC examination this year but could not pass,while Dilandita Das had been a class ten student of Sankardeb Mission HS,Udalguri. According to neighbors both of them had affairs for a year. 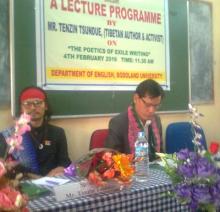 16 May 2014 - 8:11pm | Hantigiri Narzary
Two persons were killed and ten others sustain injury in police firing at Panabari under Bijni police station in Chirang district just after declaration of election result for Kokrajhar...
Follow @Assam Times