BJP and many other like minded regional parties operating in the north eastern states at a huge convention in New Delhi on Tuesday solemnly vowed to make the entire region a Congress free one.

Presided over by party president Amit Shah, the North East Democratic Alliance convention discussed in detail both long term and short term strategies to allow the saffron party take a deep grip in the entire region where there states are going to the assembly polls early next year.

In his address, BJP chief Amit Shah said by the next year NEDA government will be there in the entire north eastern states. He said the next NEDA convention will see all eight north eastern chief ministers. 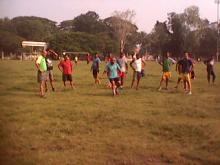 25 Sep 2015 - 1:27pm | Nava Thakuria
The city based media persons and performing artistes have prepared for a friendly football match to generate funds for the flood affected families of Assam. The charity soccer match, scheduled for...