Guwahati: Journalists’ Forum Assam (JFA) expresses profound grief at sudden demise of Kohima based senior journalist Xavier Rutsa this morning, who suffered a massive stroke after the midnight. He was rushed to the nearby hospital, but the attending doctors declared him brought dead.

Engaged with a national newspaper Xavier, 45, was also president of Kohima Press Club. He was also associated with various social organizations of Nagaland. The media fraternity along with Nagaland Governor PB Acharya, Sate chief minister Neiphiu Rio, opposition political leader TR Zeliang with others expressed grief over his death. The JFA conveys its deepest condolences to his family and all members of the local press club.

“While mourning Xavier’s untimely demise, let’s learn from the tragedy,” said a statement issued by JFA president Rupam Barua and secretary Nava Thakuria adding that the working journalists should keep aside adequate time for his/her personal health. At least they should go for regular screenings of blood pressure & sugar and weight along with other physical parameters either individually or in community level, it asserted. 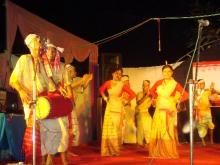 23 Apr 2009 - 11:23pm | editor
The festival of joy and happiness and the most endearing festival of the people of Assam, the Rongali Bihu was celebrated in the Millenium city of Gurgaon, by Assam Association, Gurgaon on April 18...

27 May 2013 - 10:28am | Abdul Gani
It was an evening full of music and light as everybody tried to knock the heaven’s door with guitars and harmonicas. Yes, these are the bunch of passionate fans of iconic American musician Bob Dylan...