Fani touches down NE with rains and storm

Guwahati: Fani, neither the name of a lady nor a snake struck Odisha leaving a trail of devastation in the form of a storm and rains before it entered the north eastern region with relentless rains.

Originated in the Bay of Bengal at the coastal areas of Puri, it swept across Bangladesh leaving mile impact in the north east where incessant rains continue to wreak havoc in many parts of the region.

Guwahati, the capital city of Assam remained in a zone of darkness amid heavy downpour that disrupted electricity and Telecom network where the denizens are being trapped on Saturday.

Many roads and lands have been submerged by rainwaters forcing the people to remain confined to their houses. 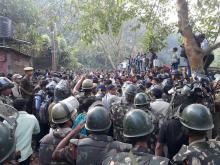 27 Nov 2017 - 10:08am | AT News
Several people including a journalist sustained injury when dsecurity forces sprang upon a group of people as the tried to disrupt an eviction drive at a reserved forest in the outskirt of Guwahati...

26 Nov 2010 - 1:58am | Anup Biswas
Demanding expeditious peace settlement of the demands of the Dima Halam Daogah (Joel) as per the Proposals for Peace Agreement submitted to the Government and the release of all jailed leaders of...