Guwahati: Over 100 people sustained injury and properties worth thousands of crores have been damaged as a ravaging storm lashed 3 Upper Assam districts on Sunday.

The storm ravaged thousands of houses started at 9 in the evening lasted for around 15 minutes leaving a trail of devastation in Jorhat,Sivasagar and Dibrugarh districts.

"As we were having dinner at around 9, the huge storm started and within 5 minutes many houses in our villages have been damaged.  Uprooted trees have blocked the roads in many places," said Sarat Saikia, a local resident of Basbari area in Sivasagar district on Monday.

"The storm was very brief but strong where none of the houses in my village has been spared.  Trees, electricity and telephone line posts have been uprooted causing immense inconvenience in the entire area," said Darshana Gogoi,  a degree student of JB College in Jorhat.

There are reports of some injury in many areas.  According to electricity authorities, the extent of damage was so huge that it would take atleast 5 days to restore the services.

Same cycle of storm hit Dibrugarh district where 10 persons are said to have sustain injury.

"This was for the second time during this period of 15 days devastating storm lashed many parts of our district. Big trees have been uprooted and in some areas even the concrete structures have been damaged, " Amulya Das said in February.

13 Feb 2017 - 8:45am | AT News
An indefinite shut down starts paralyzing normal life in the urban areas of Nagaland from Monday. Several civil society organizations in the north eastern state have enforced the shutdown after chief... 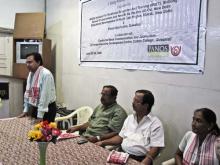