Kokrajhar: A Pangolin (Banrow) was rescued at Bhotgaon this afternoon in Kokrajhar today. People from the greater Bhotgaon area thronged in large number to see the Pangolin, a rare species found in Chakrashila wildlife in Kokrajhar.

The Pangolin was noticed by local people inside a hole of a residential area at Bhotgaon under Kokrajhar Police Station and immediately informed to the Forest department.

Forest department and IFAW workers reached at the spot and rescued the Pangolin (Banrow) and safely taken to Choraikola rescued centre of wildlife in Kokrajhar.

"he Pangolin (Banrow) was rescued safely from Bhotgaon area and taken to Choraikola rescue centre and medical treatment will be provided to the Pangolin", said a forest department official.

29 Aug 2015 - 9:48pm | AT News
A minor boy met watery grave at a steam in Guwahati on Saturday. The tragic incident took place near Khanapara when the eight year old boy was swimming along with his friends near the Trinayan Path.... 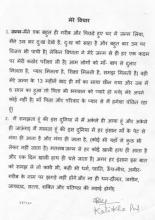 Content Regulation on violence against women – a must practice in journalism

23 Jul 2012 - 10:11pm | Syed Miraz Ahmed
The recent broadcast of mob violence against a women-member of Assam Legislative Assembly and a teenager by News Live and other television news channels gives rise to a question. How were the...
Follow @Assam Times