KOKRAJHAR: Union minister of state for Home affairs JK Reddy has made his maiden visit at Darranga along the India-Bhutan border area in Assam's Baksa district on Sunday.

Reddy met high officials of SSB and Indian army and made an interactive session with security officers at 64th Battalion of SSB camp base at Darranga in the Indo-Bhutan border.\

It was a pleasure meeting the Chief Minister of Assam Shri @sarbanandsonwal ji, this evening.
Assam has been performing well under his leadership and I hope to see the citizens of this beautiful state take an active role in the growth of the #NorthEast of India. pic.twitter.com/j1Tqm33hQO 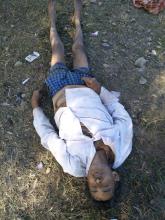 3 Jan 2018 - 8:03pm | Mithun Baruah
MARGHERITA: An unclaimed body strikes no less sensation in Margherita after it was recovered on Wednesday. The unidentified body of a youth, who was believed to have been murdered, was spotted at...

30 May 2016 - 10:33pm | Jayanta Kumar Das
Expressing concern over the rampant deforestation in the State and other associated burning issues such the man-elephant conflict, the Assam Environmental NGO Forum today urged the new Forest...