Dr Borkakoti appeared before the high level committee on clause 6 of Assam Accord at Tezpur on November 28 at the invitation of Government of Assam.

The high level committee is chaired by Justice (Retd) B. K. Sharma.

28 Feb 2009 - 3:56am | editor
Assam Chief Minister has appointed 86 primary school teachers in 12 disitrcts. The appointment letters were distributed at a function on Thursday at Dispur. In yet another decision, the government... 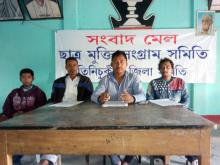 11 Jul 2017 - 7:40pm | AT Kokrajhar Bureau
Founder president of the All Bodo Students Union(ABSU) and noted writer Baneswar Basumatary is seriously ailing since few months. Basumatary,who is hailing from Koklabari of Baksa district has been...
Follow @Assam Times