Shrinkhal Chaliha, the firebrand leader of the Veer Lachi Sena which has been vehemently protesting against the Citizenship(Amendment) Act, 2019, was arrested again by the police on Monday.

Chaliha was picked up by the police from Barbarooah locality of Dibrugah where he took part in a protest rally organised against the C(A)A,2019.

He was arrested earlier in the current month on charges of making objectionable comments while protesting against the controversial Act.

However, he was released on that day itself.

Sources in the Dibrugarh police informed media persons that the leader was arrested in a case registered with a police station in Guwahati.

As per the Veer Lachit Sena the police have been taking him to Guwahati.

However, the police abstained from disclosing where he has been kept presently. 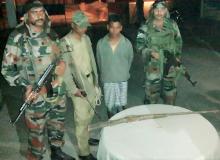 16 Nov 2015 - 12:41pm | Hantigiri Narzary
Security forces have claimed to captured another cadre of NDFB-S from Pekuanala area under Kachugaon police station late last night in Kokrajhar district.  Based on a information about presence...

9 Apr 2011 - 9:07pm | Dibya J Borthakur
Hightlighting the large scale corruption and scams done by Congress Government both in the centre and the state the peasent leader Akhil Gogoi of Krishak Mukti Sangram Samiti ( KMSS ) urged the...