Several organisations including the ASDC have jointly organised a protest against Citizenship Amendment Act, 2019 at Diphu on February 3, 2020.

In a press release the organistions appealed the people of all-walks to take part in the protest, terming the newely amended citizenship Act is a sinister game-plan to uproot indigenious populace of the state from their own land.

The protesting organisations fumed that the controversial Act would compeletly annihilate the indigeneous people's language and culture.

15 May 2014 - 10:33am | Hantigiri Narzary
An IED weighing of around 4 kgs was recovered from Jadumani village under Fakiragram police station late last night, a day ahead of parliamentary election result counting tomorrow in Kokrajhar....

14 May 2015 - 4:44pm | Hantigiri Narzary
A massive fire gutted a bakery at Subaijhar Road under Bijni police station in Chirang district in the wee hours late last night. According to Aup Dey, owner of the Sriguru Bakery told...

Is art a smart investment? 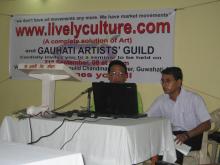 30 Sep 2008 - 1:43pm | Aiyushman Dutta
Nowadays art is an emerging market all around the globe. Economists look at this as a smart investment due to its excellent financial rewards. Although there is some awareness about it in our country...
Follow @Assam Times