One more Assamese youth was found dead in Hyderabad on Monday. Identified as Sanjeev Sinha, the body was recovered near a railway station in the morning. He hailed from Lakhipur in Cachar district and was on his way to home following rumours of impending attack.

7 Apr 2011 - 7:13pm | Ranjan K Baruah
Modern medicines have improved in many grounds. People have been benefited around the world for the modern medicines. Health care has become easy for some while it has become a challenge for many... 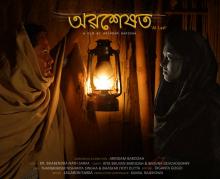 21 Jul 2017 - 2:26pm | AT News
Assamese short film, Obosheshot (At Last...), directed by filmmaker Arindam Barooah, is based on a short story titled, 'Devdoot' by Dr. Bhabendra Nath Saikia. The film is a fictional drama that...