Surface communication from Assam to the rest of the country remains cut off when thousands of BPF workers blocked railway track and highways leading to the state from Wednesday morning on protest against the arrest of West Kokrajhar MLA Pradip Brahma. The agitators who blocked all trains and vehicles demanded immediate release of Brahma and arrest of Dhubri MP Badruddin Ajmal. Shouting anti-government slogans, the protestors alleged that it was Baddrudiin who brought infiltrators from Bangladesh and fueled communal tension leading to riots and also provided arms and ammunitions to the Bangaldeshis. Curfew has been reimposed in the three districts of Bodoland Territorial Administered Districts and Brahma was picked up from his home in Dotoma in the wee hours in connection with BTAD violence.

9 Dec 2017 - 9:04pm | Robertson Tanti
The Adivasi groups are all set for a fresh agitation demanding Scheduled Tribe (ST) status. The action is starting with a seven-hour rail blockade on December 19 when Parliament will be...

7 Jul 2012 - 8:35pm | editor
One person died and four others sustained serious injury at a sensational shoot out in the district on Friday. The incident took place in Amthihara at around 8-30 in the evening where unidentified... 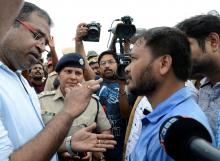