Internationally Acclaimed film Director, Jahnu Barua has been conferred with the 1st Bhupen Hazarika National award in recognition to his contribution to Indian cinema.

The award, instituted in the memory of the late musical icon Dr. Bhupen Hazarika, by Pune-based Sarhad, was presented to the Assamese filmmaker at a ceremony here on Sunday Evening, 2nd December, 2012 by former Assam chief minister Prafulla Kumar Mahanta, in a function held at S M Joshi Hall, Pune.

An alumnus of the prestigious FTII here, recalling his early days in Pune back in 1971, Barua said, “the time I spent in Pune were one of my best days of life”, also spoke how he managed to learn Marathi. Later he added on the speech as “Pune is my second home”. Being the member of Governing Council of FTII, "Barua said he was touched to get the award which is named after Bhupen Hazarika, as he considered Hazarika his 'guru'.

A recipient of the Padmashree, Barua has won nine national awards for his films. He has directed a number of Assamese and Hindi films.Along with Bhabendra Nath Saikia, is one of the pioneers of Assamese Art cinema.
'Maine Gandhi Ko Nahin Mara', a film directed by him won the prestigious Fipresci (The International Association of Film-Critics) award in 2005. His Assamese film "Baandhon" opened the Feature Film section of the Indian Panorama at the just concluded 43rd IFFI in Goa.

Sarhad president Sanjay Nahar said the award is an effort to enhance people-to-people contact and provide a boost to development in the northeast. 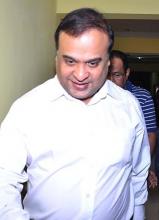 26 Nov 2014 - 7:52pm | AT News
Minutes after the 8-hour long CBI interrogation in Kolkata on Wednesday, Dr Himanta Biswa Sarma alleged a nefarious political conspiracy behind the Saradha scam where his name mires in controversy....

10 Mar 2013 - 8:11pm | Ritupallab Saikia
Even though the pages of news papers have increased now a days, we are still missing out on developmental and positive news and it is very unfortunate that now news finds us, we do not find news,...

18 Apr 2009 - 8:27am | editor
Normal business activities in Guwahati have come to a grinding halt as the traders on Saturday in protest against the move to the trade license fee by 300% by the Guwahati Municipal Corporation. With...
Follow @Assam Times