Five days have passed since a woman was brutally attacked and dumped on the roadside in Lakhimpur who succumbed injuries at the GMCH. But police have yet to arrest the perpetrators which runs into a hail of protest accross the state.        Thousands of people have been staging dharna in Lakhimpur demanding immediate arrest of the culprits.            The protestors made it clear that they would remain calm only after the examplary punishment of the perpetrators.    The incident took place in Boginadi when the mother of 8 year old child was brutally attacked after she got into a tempo on her way to take her child back from school.      Hours after, she was dumped on the roadside.         On Saturday she was rushed to the GMCH where succumbed to injury on Monday.

Me-Dam-Me-Phi at Delhi on January 27

21 Jan 2013 - 7:35pm | AT News
Association of Tai Ahoms (ATA), NCR is observing Me-Dam-Me-Phi to show respect to the departed ancestors and remember their contribution to society on January 27 at the Community Centre, DLF Phase I... 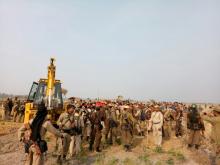 18 Feb 2017 - 8:25pm | AT Kokrajhar Bureau
A massive eviction drive was carried out at Saliagaon near Boro bazaar under Bhuyanpara forest range in Manas National Park on Saturday which drew strong protest from public during the eviction,...

12 Oct 2016 - 10:42pm | AT Kokrajhar Bureau
The Bodoland Janajati Suraksha Manch has put up strong objection against the political party’s promise to grant ST status to the six selected communities and termed that it is purely for the interest...
Follow @Assam Times