The Gauhati High Court on Wednesday is expected to hear the anticipatory bail petition of Kamal Medhi who is absconding after police registered case against in connection with the recent self immolation case.

Earlier, the Court of chief judicial magistrate refused bail to the KMSS general secretary and his counsel moved the high court which agreed to hear the plea on Wednesday.  Dharjya Konwar, publicity secretary, KMSS, however was granted interim bail till Wednesday while the interim bail of Amarjyoti Bezbaruah was made absolute by the Court. 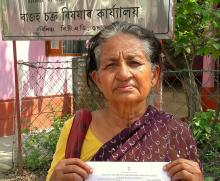 9 May 2017 - 8:35am | Shajid Khan
In what may be a tale aptly going with the legal maxim "Justice delayed is justice denied" a sexagenarian poverty striken widow lady who is running from pillar-to-post seeking ex-gratia of her...

25 Jul 2014 - 9:04am | AT News
Amid crisis within the Congress legislature party, chief minister Tarun Gogoi will talk to the dissident MLAs very soon. Sources told Assam Times that Gogoi will discuss the pending issues...