A former ULFA militants’ body tore apart Akhil Gogoi a day after the KMSS announced list of candidates of his choice for the upcoming Lok Sabha polls.

Addressing a press conference in Guwahati on Friday, the organization alleged that Gogoi struck secret deal with AGP, BJP and AIUDF where he agreed to back a section of candidates in the name of crusade against the ruling party.

They further brought some serious allegations against Gogoi saying that what he said on Thursday are not completely true.

4 Mar 2016 - 7:21pm | Hantigiri Narzary
A candle lighting rally was organized by the All Bodo Students Union paying homage to former Lok Sabha Speaker and Tura MP PA Sangma, who breathed his last today at his own New Delhi residence... 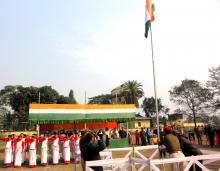 R-Day at Kalaigaon with gaiety

27 Jan 2015 - 8:46am | Jayanta Kumar Das
The 66th Republic Day was celebrated at Kalaigaon with gaiety. At Kalaigaon, Dina Moni Das,Circle Officer,Kalaigaon Revenue Circle hoisted the national tricolour at Gandhi Bakori field at 9 am....

30 Jun 2017 - 9:48pm | Syed Miraz Ahmed
The 24th Conference of the Directors General of Police Forces of the North Eastern Region and Heads of Police Central Organizations concluded Thursday June 30, after two days of deliberations on a...