Massive security arrangement is in place in Koliabor constituency where Lok Sabha polling is set to take place on Monday.

Polling will take place from 7 in the morning to 4 in the afternoon  in all the booths to elect the member of parliament from ten candidate. The authorities have deployed over 5,000 polling officials who have arrived in the booths. These are apart from the security forces to ensure free and fair polls in the constituency where altogether 14,46,408  voters will exercise their franchise. 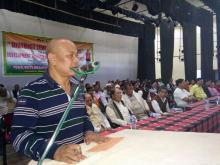 Hagrama stresses on peace and integration

8 Dec 2016 - 11:36pm | AT Kokrajhar Bureau
BTC Chief Hagrama Mohilary has emphasized of peace and integration among all sections of communities which is the key way to gain development and unity in BTAD region through which prosperity would...

6 May 2017 - 8:47pm | AT Kokrajhar Bureau
Two poachers were apprehended by police and army at Turibari village near Manash National Park in Baksa district on Saturday. They were identified as Arjun Boro and Gangar Basumatary. Two country...