Trouble seems to have brewed for Himanta Biswa Sarma and Manas Bora.

Kamrup (Rural) Deputy Commissioner GM Balayogi have lodged a complaint with Dispur police station against the Jalukbari MLA and education minister along with the Congress candidate in Guwahati acting on the allegation of rigging attempt.

According to sources, strict action be taken against the polling officials deployed at the Birnnijora booth where a VDP member was seen pressing the EVM button on behalf of a section of voters in full view of the presiding and polling officers.

4 Sep 2015 - 9:18pm | AT News
Dissident Congress leaders have been camping in New Delhi to carry forward their further course of action. According to sources, Dr Himanta Biswa Sarma who is taking the lead will help them... 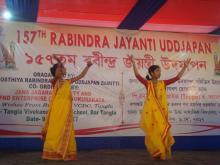 9 May 2017 - 9:41pm | Shajid Khan
The 157th Rabindra Jayanti was celebrated in a grandeur manner with a day long programme here in Vivekananda High School premises of Bor Tangla on Tuesday. The day marking the birth anniversary of...