The break down in law and order, if any, can be attributed to the shortage of police strength.

The Assam government on Monday informed the House that nearly 20 per cent posts of the 75,559-strong Assam Police have been lying vacant at present.

Replying to a query by AGP MLA Keshab Mahanta during Question Hour in the Assam Legislative Assembly on Monday, state Environment and Forest Minister Rockybul Hussain said 14,356 posts were vacant out of the 75,559 sanctioned posts in the police department.

Hussain said that of these vacancies, four posts at the level of IGP could not be filled as "there are no eligible officers completing 18 years of service in the IPS cadre for promotion to the rank of IGP.

The force has 2,499 posts of constables lying vacant, while 420 posts of sub-inspector were yet to be filled. Hussain said 138 ASI and 300 head constable posts were vacant among others. In the Special Branch, 407 posts were vacant out of a total strength of 3,538 personnel. 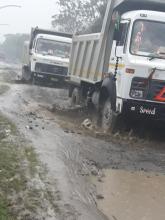 5 Mar 2018 - 11:00am | Akshaya Pranab Kalita
NAMRUP: Bad roads and broken bridges in the nook and corner of Assam has a regular feature these days. Not even a single place is left in the north eastern state without a road in dilapidated...