A total of 640 patients from greater Saralpara thronged the medical and awareness camp to receive medical check-up on Saturday along the Indo-Bhutan border of Kokrajhar district, was organized by Army unit of Red Horns Division.

On the other hand, 16 Bn SSB Ranighuli was organized a medical civic action programme along with Samajik Chetna Abhiyan under perception management for the welfare of population of border areas at Ultapani area on Friday.

Several notebook, pen, pencil were distributed among students, besides, free water supply for villagers of Bangaon, Sonapur in the area were distributed. A K C Singh, Commandant of the battalion distributed the materials.

‘Irrespective of citizens of the local area expressed their gratitude to SSB for not only taking care of their security needs but also for undertaking various community welfare programmes for border region of the district’, said a citizen.

6 Jan 2009 - 9:33pm | editor
The Centre has extended its ceasefore with the National Democratic Front of Bodoland for another period of six years. Confirming this Assam Chief Minister Tarun Gogoi iad in Delhi that the decision... 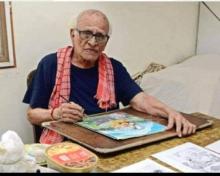 1 Oct 2020 - 1:14pm | AT News
Lots of people have condoled the death of noted children-literateur of Assam Gagan Chandra Adhikari, who contributed tremendously in the field. Adhikari passed away on Wednessday night creating a...