Caught in a barrage of controversy that left BJP red faced, Raha MLA Dimbeswar Das called the entire incident a conspiracy to belittle his image.

Addressing a press conference in Raha on Friday a day after the embarrassing episode, the BJP MLA said,” This was a conspiracy hatched by some people to malign my image in the society.”

He said, “ I did not tell Jayanta Das to touch my feet. The junior engineer willingly touched my feet seeking apology for the misdeeds he committed.”

"I went to the block office on Thursday to attend a meeting following the invitation of the block office. My car driver had gone for an argument with the JE over a car parking issue. Later it was settled and misunderstood between the two was over. All of a sudden, while I was sitting inside the office, the JE came to me and seeking apology he had touched my feet without my consent. This was not like that I made the JE bound to touch my feet for his misdeeds as a section of media alleged” he said.

The MLA spoke out on Friday a day after the social media showed the junior engineer shown to have touched the feet of the legislator tendering an apology for a verbal duel with the driver.

17 Nov 2014 - 8:39pm | AT News
This year open quiz Brain Jam is going to be held in November 22 at ITA Machkhowa, Guwahati. Renown quiz master Barry O’Brien, will conduct the quiz as usual. The theme is set-... 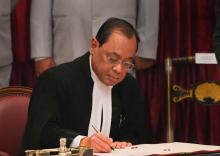 3 May 2019 - 10:33am | AT News
The Supreme Court has made it plain that Chief Justice of India (CJI) Ranjan Gogoi will hear the foreigners detention centres case. Dismissing a plea moved by lawyer Harsh Mander seeking recusal of...

11 Jun 2009 - 7:05am | Mowsam Hazarika
Pramila Rani Brahma, Agriculture Minister, Assam has given stress upon farm mechanization in the state to ensure double cropping and to attract new generation towards agricultural sector. In this...