The nationwide presidential polls ended on Monday afternoon in Assam where the legislators voted to elect the successor of Pranab Mukherjee who demits very soon.

The voting began at 8 in the morning where chief minister Sarbanabda Sonowal casted his vote  along with other legislators which ended at 4 in the afternoon.

Former chief minister and senior Congress leader Tarun Gogoi, who is on his visit to New Delhi casted his vote at the Parliament secreteriat along with many other MPs from the state

BJP and it's coalition partners have favoured Bihar Governor Ram Nath Kovind, while the non NDA legislators are set to vote for former minister and Lok Sabha Speaker Meira Kumar. The results are expected by night.

Workshop on Human Rights Violation in Assam at Nagoan

28 Jun 2008 - 4:11pm | editor
Union Grants Commission (UGC) sponsored workshop on HUMAN RIGHTS VIOLATION IN ASSAM is all scheduled to be held on 28th June 2008 with a day long program at ADP College premises Nagaon organized by... 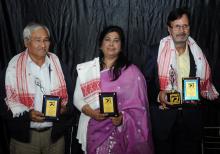 8 Jan 2021 - 8:51am | Prantik Deka
Roopkar Awards, instituted in the memory of distinguished cine-journalist and litterateur Pabitra Kumar Deka, was presented to renowned filmmaker Jahnu and noted actor Arun Nath for the years 2019...