AGP unification rally to be held at Golaghat

Preparation is going on war footing for the 23rd foundation day and unification rally of Asom Gana Parishad, which is going to be held on 14th October at Golaghat. It is to be mention here that AGP was founded on 14th October 1985 at Golaghat by the then leadership of Assam movement after signing of the Assam accord. This unification has been a long awaited one and the party workers as well as the well-wishers of the regional party sincerely hope that this rally will yield a new chapter in the political arena of Assam. On that day AGP(P), TGP and PLP which have split from the AGP earlier will come together and merge in to one powerful AGP. Speaking to the media persons at a press meet, Atul Bora, spokesperson of AGP said that a three hundred member strong reception committee have been formed for the rally having Mr. Prabin Kumar Gogoi as the Chief Convener, Atul Bora as President and Dr. Nripen Baruah as General Secretary. The venue of the rally will be named after Late Bhrigu Kumar Phukan and the gateway will be named after Late Mohendra Nath Saikia, President, Reception Committee of AGP convention held at 1985. The organizers are expecting a gathering of about fifty thousand on that day.

4 Jul 2012 - 1:15am | editor
Renowned poet Hiren Bhatta remains unchanged in his health condition who is undergoing treatment at the Dispur Hospital. Doctors attending on him said that his condition is still critical and that...

22 Jul 2015 - 1:39pm | AT News
The overall flood scene turns grim on Wednesday again following incessant rains that lashed parts of the state during the last 24 hours.The river Brahmaputra and its tributaries have started flowing... 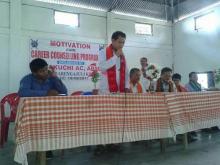 15 May 2017 - 7:37pm | Robertson Tanti
The Dimakuchi Anchalik Committee of All Bodo Students Union (ABSU) organized a career counselling and motivational program at Borengajuli Xatra Community hall on Monday where more than 60 students...