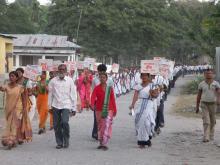 29 Nov 2009 - 1:19am | Jayanta Kumar Das
More than thousand people, mostly students and woman attended a huge rally at Nonaikhat village near Indo –Bhutan international border on November 26 to create awareness among people for the...

4 Sep 2015 - 9:07pm | AT News
Congress leader Ripun Bora took on Sarbananda Sonowal a day after the Union minister Union minister claimed that the Centre has released funds for the flood affected people.Talking to reporters in...

26 Feb 2017 - 8:44pm | AT News
The United Liberation Front of Asom (I) has strongly opposed NDFB general secretary who called Chaolung Sukafa and saint Shankardev the enemies of the Bodo people.In a statement the outfit’s central...