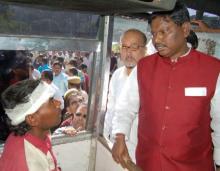 25 Nov 2007 - 10:38am | pbaruah
Former Jharkahand Chief minister Arjun Munda and JMM leader and former Union minister Sibu Soren on Sunday visited Guwhati and took stock of the situation in view of the mob violence where several...