Data on Floods in Assam: Nearly half a crore/ five million displaced in Assam

Guwahati: Nearly half a crore/five million people were displaced in devastating flood in Assam. According to 2001 census, the total population of Assam is 2, 66, 38, 407 and floods have displaced about one fifth of the total population. Total 24 districts out of 27 have been hit by outpouring and 3967 villages ravaged, says the Assam Government in an official communiqué. Number of total displaced up to Tuesday morning was 44, 19, 792 but as heavy rain continues the number of people affected are going up rapidly. Though government claims only 15 lives were lost during second spate of flood starting sicne12 July, local news paper published from Guwahati claimed it to be 29 quoting unofficial sources. Total 5, 35, 586 hectors of area submerged, where 1, 55, 604 hectors are crop area. There are reports of breaches in embankments in 52 places. 385 relief camps have been opened and there are 52070 numbers of inmates in those relief camps. 264 temporary shelters have been set up and 209433 no of people are there in these temporary shelters. GR Distributed

19 Jul 2008 - 4:57pm | editor
The authority sounds red alert in the city of Guwahati following a specific input that a seven member hardcore ULFA group belonging to 27th and 709th have sneaked into it to disrupt the Independence... 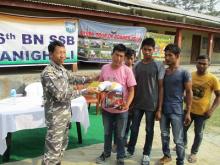 20 Dec 2016 - 9:17pm | AT Kokrajhar Bureau
Free Medical and Veterinary civic action programs organized at Dadgiri with the help of medical officer and veterinary doctor of 15 Bn SSB and sector head quarters Bongaigaon on 20/12/16. More than...

22 Nov 2014 - 7:14pm | AT News
The Golaghat police have blamed Naga militants for the recent firing at Ratanpur paddy field where a villager was killed and three others sustained injury.According to police, despite tight vigil by...