Armed with a record number of new members, Assam Congress is preparing its ground works for next Assembly polls in 2011. This was what APCC president Bhubneswar Kalita told reporters on Saturday at the Rajiv Bhawan. Kalita said, "we are ready for the polls anytime" but in the same breath he said he was not qualified to make any comment on the advancing the elections. According to Kalita, APCC was preparing for the organisational elections in the first part of next year by mobilising a targeted 10 lakh primary membership till December 31 to hold the booth committee level or primary unit level polls. AICC central election authority member and NE organisational election observer AP Sethi, said the party hustings will have 33% reservation for women. 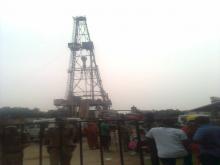 4 May 2017 - 9:03pm | AT News
A Hindi speaking person and his daughter sustained injury when suspected Ulfa -i rebels replied a grenade in Tinsukia district on Thursday. The grenade exploded in Kakopothar area in the evening...

15 Oct 2015 - 8:41pm | AT News Itanagar
The political stalemate seems to have die down in Arunachal Pradesh with the stage set for four new Congress legislatures to be inducted in the Nabam Tuki council of minister.According to information...