An amount of Rupees Two Lakhs was looted at Borbazar area of Nagaon town today, at around 2.10 pm. The incident happened when this amount was in a bag , carried by Surendra Nath Bora, an engineer of Rupahihat Development Block under Nagaon DRDA. Bora told the media that he put the bag on his car while receiving a call on his mobile. In that fraction of time, someone took away the bag. Bora also told that he brought that amount for the payment from the LGB Bank Borbozar branch. The police has launched search operation to nab the culprit involved with the crime but no one has been arrested so far till filling up the report.

Government forms SIT to inquire into killing of ABMSU President

Raid at Orchid park in Kaziranga

1 Mar 2018 - 4:43pm | AT News
GOLAGHAT: The police have raided the Bio Diversity Park in Kaziranga triggering no less anger among the KMSS leaders and activists who set up it two years back. A team of Bokakhat police along with... 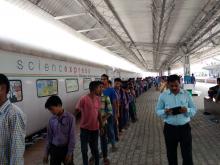