Retirement age up by one year

The retirement age of Assam government employees rises up to 60 years. The order was issued on Tuesday to come into effect from November 30.

According to official estimates, more than 6000 employees will benefit from this extension who reach their superannuation.

The Assam government raised the retirement age to 59 from 58 years just before the last Assembly polls in 2005.

5 Nov 2007 - 5:21am | pbaruah
The Ministry of Power has launched a National Awareness Campaign in order to promote energy conservation in the country.A painting competition for students at the school, State and National level has... 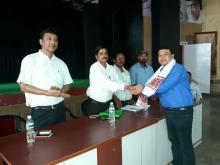 30 Apr 2015 - 6:26pm | AT News
The Centre has exempted Assam from the land deal with Bangladesh. The union cabinet finalised the decision on wednesday. Minister Sarbananda Sonowal told Assam Times that the goverment has...