The Assam unit of Bharatiya Janata Party vows to eliminate all corruption in the panchayat system if the party is voted in the upcoming panchayat polls. In its poll manifesto released in the city on Tuesday, the party promised steps to control the prices of essential commodities and also steps for overall development of the people.

After its victory in the North Cachar Hills Autonomous Council, the Assam BJP unit target the panchayat polls to steal the march. In its manifesto for the panchayat polls, the party promised that the party, if voted, will make an end to the on going corruptions in the implementations of the schemes for old age pension, widow pension. The party further alleged that the ruling Congress has been failing in the implementation of the food for work scheme. The party also promised to implement the all those cited in the Constitution.

To top it all, the leaders said the party aims at setting up panchayati raj in real sense of the term in the rural Assam. 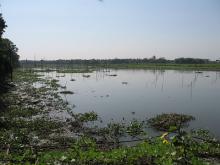 Plight of Wetlands and Water Birds

Mahanta to take over as AGP president

17 May 2012 - 7:51pm | editor
Former Assam Chief Minister Prafulla Kumar Mahanta is all set to take over as new AGP president on Thursday.The decks for the two time former chief minister was cleared at crucial meeting of the...