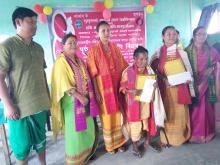 9 Mar 2017 - 4:55pm | AT Kokrajhar Bureau
Two business women were honoured with Aijw Palangi Bantha 2017 (Women Enterpreneur Award) on the occasion of International Day of Women’s at a programme held at Gwjwn Dera,Chandrapara in Kokrajhar...