A book based on a screenplay of an unfinished cinema by late Mrinalkanti Das titled Oronyot Boroxun (Rain in the Forest) released at a function at Guwahati Press Club on the Friday. Noted writer Apurba Sarma formally relased the book.

Long back in 2004, cinematographer-director Mrinalkanti Das planned to make a feature film. But he met with an accident while going for location hunt. He expired in that accident and his dream debut film as director remained unfinished. The book is now published by his wife.

31 Oct 2013 - 9:49pm | SK Hasan
In the memory of the victims of  serial bomb blast at Guahati on October 30, 2008, Nazira regional unit of All Assam Studnts Union observed anti terriost day at Nazira. On this occation over...

Student run over by train at Thekeraguri

29 Mar 2014 - 7:49am | Dibya J Borthakur
Parismita Das (17), an H.S first year student of Raha college died after she was run over by the upper Kapili passenger train at Thekeraguri under Raha P.S on Friday. The accident took place at 12.25... 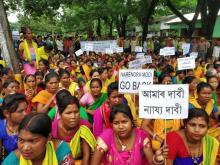