The Congress has been all along using the Muslims for their political benefit, and that the Muslim community of the country has gradually understood this fact said, the BJP Minority Morcha National Secretary Arshad Alam, at a press conference here on Saturday.

Echoing the sentiments of the BJP towards the Hindu population of

Bangladesh fleeing to India, Alam said, “I agree that the Hindu population should be given Indian citizenship, since they had to flee from Bangladesh because of torture and harassment in that country.” He further added, “The Muslims in that country are not facing any problem while performing their prayers, reading the Qur'an Sharif, or fasting unlike the Hindus who face problems while performing their rituals or Poojas. Therefore, we welcome the Hindus to this country”.

“Seeing Narendra Modi’s developmental works in Gujrat the corrupt politicians are scared across the country. If he becomes the Prime Minister the entire country will see the development. The common men of the country have appreciated Modi’s work,” according to Alam. Criticizing the Congress’ role he said that the ruling party has been using the Muslim community for the sake of votes only and that is why the condition of Indian Muslims is very poor. “The Congress has always been using the people of the Muslim community for the sake of votes only. They never want any development for the community but BJP wants all round development for every citizen of the country. If we compare the status of Muslims of Gujarat and Assam, everything will be clear,” he opined. He termed Congress as a ‘Corporate Company’ and that the party has many agents in the country to carry out their activities. He even went up to the extent of saying that Badruddin Ajmal led All India United Democratic Front (AIUDF) is one of the agents of the Congress.

“Comparing Gujrat riot with clashes in Assam he said that people have seen more bloody clashes during the Congress regime than the BJP. On the Ishrat Jahan case he said that the Congress is making it a big issue for their political gain. “There are thousands such cases happening in India. I’m not claiming it to be a fake encounter as the investigation is still on. Just because a Muslim name is involved, a controversy is being created, India is not a country of only Muslims, and there are others communities staying here too,” he concluded saying.

25 Feb 2008 - 12:49pm | editor
Altogether 61 poachers in the Manah National Sanctuary on Monday have surrendered before the BTAD administration at Lobdang guri market in Bagsa district. They further have left some arms and... 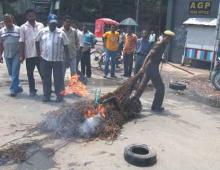 9 Jun 2008 - 7:50pm | editor
A security personnel trying to keep away the tires that have been seen burnt by the bandh supporters in the midst of the street in Guwahati on 09-06-08 during the 12-hour Assam Bandh called by the...