Assam Governor Lt General (Retd) Ajoy Kumar Singh has reiterated his clarion call to the militant outfits to come forward for talks for a peaceful and prosperous Assam saying doors for talks are still remaining open.

Hoisting the national tri-colour at the Judges’ Field on Saturday morning, the governor said the anti insurgency operations have been successful adding the state will get a India Reserve battalion by March.

Terming the Beltola incident a serious incident to be dealth with, he said the Justice Manisana Commssion has begun its probe to unearth the truth.

The governor has claimed that his government is fully committed to implement the Assam Accord in letter and spirit adding that 21 new tribunals have been set up to speed up the detection of illegal foreigners. Also, the scanning of the National Registrar of Citizens, 1952 is nearing completion. Similarly, the fencing work of the Indo-Bangla border is also in progress.

The governor said the state government is having a comfortable financial situation adding that the government has not so far resort to over draft these days and instead there is cash balance for release of funds for developmental works. Several schemes are working in the state to generate employment, said the governor adding that Assam Vikash Yojana is there with Rs 500 crore to uplift the state’s vital sectors including agriculture, education, drinking water, veterinary, powers, and fisheries and what not.

The governor also inspected the guard of honour at the Filed. Despite ULFA diktat, hundreds of people participated in the programme at the Judges’ Field.

National flag were hoisted by a good number of citizens in the city at their residence. Bus services are thin in the city but the police and para military troops are patrolling on the streets. The situation is by and large peaceful.

20 Jan 2017 - 4:43pm | AT Kokrajhar Bureau
Three passenger buses were detected by sale taxes official and staffs in a search operation along the 31C national high way this morning at Patgaon in Kokrajhar district today. The buses...

28 Jul 2014 - 10:04am | AT News
Tension seems to have escalated in Tinsukia district a day after miscreants from Arunachal Pradesh lynched a local youth on Sunday allegedly for falling in love with a girl of the neighbouring... 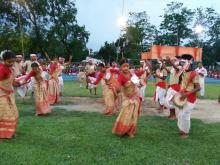 19 May 2016 - 10:40am | Shajid Khan
Bohagi Utsav organized by Tangla Xuva Mancha concluded here on Tuesday. On the first day on May 14 as a part of the celebration unfurling of flag was done by Mintu Pathak President of the organizing...