Five persons of a family were killed at a tragic rad mishap in Dergaon sending shockwaves across the state on Wednesday.

It took place at Balijan on the National Highway No 37 when a vehicle carrying five women and kid rammed into a tree at around 12 in the afternoon.

Four women and the kid were killed on the spot. Three others are battling with life at the Jorhat Medical College Hospital after being shifted to it.

Eyewitness told Assam Times that the driver of the speeding vehicle suddenly lost control over it and hit the tree.

30 Dec 2016 - 10:48pm | AT Kokrajhar Bureau
The Bodo Sahitya Sabha (BSS) and All Bodo Students Union(ABSU) expressed concern over the killing of innocent people in false encounters by security in the name of curbing militancy in the State.... 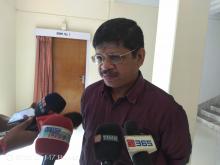 22 May 2014 - 6:12pm | Hantigiri Narzary
Noted writer and retired IRS Janaklal Basumatary unveiled ‘the Saga of the Bodos’, a history book authored by noted historian and educationist Hiracharan Narjinary at a programme held at Sahara Hotel...