Poachers kill another rhino in Assam

Guwahati : Suspected Karbi poachers last night killed another rhino in the Kaziranga National Park,taking the total number of rhinos at the world heritage site falling prey this year to nine.
Park authorities said here the rhino was shot dead near the Goroimari camp of Bagori range of the park around 6.30 pm. The horn was carried away by the poachers. Sources said the poachers fired two rounds and immediately fled from the place. Forest guards then hemmed in on the area and a massive operation was launched to nab the poachers.
This is the ninth rhino killed in the world heritage park this year.On July 3, another rhino was killed in the Burapahar range.
Two days after the incident, authorities of the Kaziranga National Park have dashed a report to the Asom government explaining the loopholes in the park’s security machinery which have abetted the recurring incidents of poaching.
In its report to the State Government, the KNP authorities pointed to lack of manpower, outdated arms and inadequate budgetary allocation as shortfalls which required immediate attention.
On July 10, forest guards gunned down a poacher in the Burapahar range and recovered a pistol and some live rounds. Since 1995, at least 92 poachers have been killed while another 660 arrested in the KNP alone.
After six rhinos were poached in the first quarter of this year, the forest department has been facing much heat from various quarters to intensify the security arrangements. Even international bodies had moved the prime minister, seeking adequate measures to check poaching the famed Park.
The world heritage site has witnessed the killing of 558 one-horned rhinos since 1980. 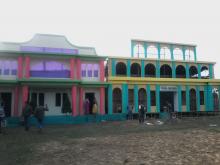 18 Aug 2016 - 11:58am | Shajid Khan
The cause of men-elephant on the Indo Bhutan area is enchroachment of forest land. This was observed by Rihan Daimary State Minister PHE, Food and Civil Supply at Panery Durga Mandir premises on...

8 Mar 2009 - 11:59pm | editor
The much-hyped third front is set to fall flat in its bid to have a non Congress and non BJP government. Barring CPI and NCP leaders there were no leaders from AUDF and CPI(M) as it was convening a...
Follow @Assam Times