A  Junior College with Arts Stream was inaugurated successfully at Dimakuchi, a small town located 20 km away from Tangla smart city. NRDS Group of Institutions, a leading educational institute of North East India for the development of rural areas has taken this initiative. BTC Deputy Speaker, NerswnBoro inaugurated the college yesterday and said that Dimakuchiregion has brought good name and fame in the HSLC examination and the upcoming colleges have high ambition from the students of the region and have given a scope to study at low cost infrastructure. The academic session of the college will start very soon with 65 students and 9 faculty members. The Principal of the college, ShakharamNarzary at the inaugural ceremony said that the college wants to give better environment in the field of education.

The ceremony was graced by the college Vice PresidentAlongbarSwargiary, Principal of Dimakuchi College J.K. Basumatary, invited guests students and parents of Dimakuchi area.

16 Nov 2014 - 11:08pm | AT News
Assam Sahitya Sabha on Sunday elected Dr Dhrubajyoti Bora as its new president for the next two sessions. Dr Bora’s name was announced at its office in Diphu where the entire process completed on... 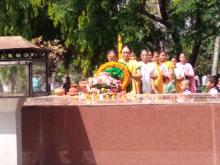