Assam Police officials confirmed that five of their personnel were killed in clashes on Monday at a contested border point.Fifty policemen were injured, including Nimbalkar Vaibhav Chandrakant, SP of Assam’s Cachar district, who sustained a bullet injury in the leg.

in a tweet, Chief Minister Himanta Biswa Sarma, said: “I am deeply pained to inform that six brave jawans of @assampolice have sacrificed their lives while defending constitutional boundary of our state at the Assam-Mizoram border. My heartfelt condolences to the bereaved families.”

1. In another breach of existing agreements and the existing status quo, Mizoram began constructing a road towards Rengti Basti in Assam, destroying the Inner Line Reserve Forest in Lailapur area. Simultaneously, the Mizoram side also set up a new armed camp on a hillock next to the camp of the neutral force, CRPF, in the same vicinity.

2. In an attempt to diffuse the situation and resolve matters, a team of Assam officials including an IGP, DIG, DC Cachar, SP Cachar and DFO Cachar went to the area this morning to request the Mizoram side not to disturb the status quo.

3. Sadly, however, they were surrounded and attacked by a mob of miscreants from the Mizoram side, which was visibly supported by the Mizoram Police. The aggressive behaviour and posture of this mob along with the fact that they were brandishing weapons and wearing helmets is clearly seen in all available video footage. While, the mob pelted stones on the Assam officials and destroyed three vehicles including the DC's car, the Mizoram Police simultaneously fired Tear Gas Shells on the delegation. The IGP was injured in this barrage.

4. In the afternoon, SP Kolasib along with two Additional SP level Officers held a discussion with the Assam delegation, during which they were requested to control the mob and not let them take the law in their hands, thus disturbing the peace.

5. The Mizoram officials went ostensibly to talk to the mob, but the SP Kolasib returned again around 4:30pm to state that he had no control over the mob. Horrifically, even while SP, Kolasib was in talks with the Assam officers, the Mizoram Police opened fire on the Assam officials and civilians, who had by then gathered there, from two dominating high features with automatic weapons including LMGs.

6. It is with a heavy heart that we are constrained to note that what is being termed by the Mizoram side as an intrusion and aggression by Assarn, has left 5 Assam Police personnel (SI Swapan Kr. Roy, Cn Liton Suklabaidya, Cr M.H. Barbhuyia, Cn N Hussain, Cn S Barbhuiya) confirmed dead (6 as per initial reports, which is being confirmed) and more than 50 injured, including SP Cachar, Shri Vaibhav Nimbalkar, IPS who has a bullet embedded in his leg and is in the ICU.

7. The Assam Police and Officials have shown remarkable restraint in the face of an unimaginably horrific attack on them that is borne out by the fact that there are no casualties on the Mizoram side despite the huge number of miscreants attacking the Assam officials. The fact that there were a large number of civilians from Mizoram present in the area was taken into account by the Assam Police, which showed restraint even though the same people were attacking it.

8. The Government of Assam is committed to maintaining cordial relations and peace, while restoring neighbourly relations. It requests the State of Mizoram to restrain its people and Police personnel from indulging in wanton violence, and work towards restoring peace.

1. Around 200 (two hundred) Assam armed Police led by IGP, Assam Police accompanied by DC, Cachar, SP, Cachar and DFO, Cachar came to Vairengte Auto-rickshaw stand at around 11:30 a.m. today i.e., 26.07.2021. They forcibly crossed the duty post manned by CRPF personnel stationed there and overran a duty post manned by 1 (one) section of Mizoram police personnel. The Assam Police also damaged several vehicles that were travelling along the National Highway between Vairengte and Lailapur.

2. Upon learning of the arson committed by Assam Police, residents of Vairengte town, Kolasib District proceeded to the site to inquire. These unarmed civilians were assaulted by Assam Police by lathi charging them and firing tear gas, thereby causing injuries to several civilians.

3. SP, Kolasib and an Executive Magistrate went to meet them and try to resolve the issue. However, Assam side were adamant and unwilling to discuss the issue.

4. The confrontation continued and a volley of tear gas canisters and grenades were launched at Mizoram Police followed by firing from Assam side at around 4:50 p.m.

5. Mizoram Police responded spontaneously by firing back at Assam Police inspite of the fact that SP, Kolasib District was still inside CRPF duty camp negotiating with the Assam Police authorities.

6. The entire development had been quite unfortunate. It all started with the Assam Police aggression into the duty camps of CRPF and Mizoram Police near Vairengte Auto-Rickshaw stand.

7. With the intervention of the Hon'ble Union Home Minister who spoke to both the Chief Ministers, Assam Police have withdrawn from the place and the duty post bave been handed back to CRPF personnel.

9. The Government of Mizoram desires that the inter-state border issue with Assam be resolved in an atmosphere of peace and understanding. Accordingly, we call upon the State of Assam to create congenial environment for peaceful resolution of the dispute. 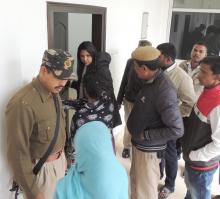 22 Nov 2008 - 3:28pm | editor
Once again the recent encounter between army and ULFA in Baihata Chariali has mired in controversy. The ULFA cadre killed in Wednesday night encounter with police in Hindu Moujuli village has been...

7 Sep 2014 - 10:30am | Hantigiri Narzary
Gopal Chandra Basumatary is no more. The president of All BTAD Gaonburah Association breathed his last at his resident Kashibari in Kokrajhar on Saturday. He was 68. He is survived by his wife,...