Speaking to the media at Kokrajhar, APCC senior spokesperson Gorjon Mushahary charged the state government with creating a chaotic environment in Bodoland Territorial Region districts by misguiding the administration.

The congress party demands CBI investigation into the encounter in Ultapani forest area and punishment of the responsible parties, as innocent Bodo youths were killed in the name of the encounter.

25 Sep 2017 - 10:56am | editor
Yet another witch hunting incident fans no less shock and anger across the on Monday two days after it came to light. The incident took place at a remote helmet in Chirang district bordering Bhutan... 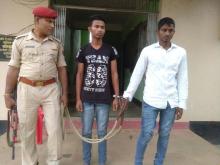 6 Apr 2018 - 4:27am | Nikhil Mundra
Hojai: The Daboka Police in Hojai caught two notorious car lifters acting on a false complaint filed by the duo on Thursday. Identified as Aamir Hussain and Emamul Hussain, they lifted a car and...