25 Jun 2017 - 7:33pm | Prantik Deka
The National Award winning film director-editor Ranjit Das, who started his career with noted filmmakers D’bon Barua and Jahnu Barua, has made a fascinating documentary on the traditional Deul or...

No outside team in Bordoloi trophy

11 Dec 2008 - 3:43pm | editor
Footballers from the country and abroad will not be seen in action this time in theBordoloi trophy football match slated to begin on December 16.Uzbekistan and Portugal teams who have earlier... 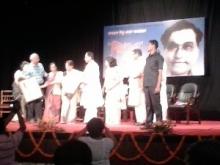 21 Jun 2013 - 10:08am | Nibirakash Baruah
Chief Minister of Assam Tarun Gogoi, while presenting the Bishnu Rabha annual awards on Thursday at a function held in Rabindra Bhawan said that art and culture is very essential for the society as...