Guwahati: A Facebook post just before 7 hours of massive earthquake which jolted Assam and some NE states is doing rounds in the social media,  According to reports  Sasanka Talukdar, a budding journalist  of Pathsala in Bajali district of Assam had  posted in his Facebook account on Wednesday (April 28)  "Earthquake Aaayga"(sic) which have garnered 189 shares in Facebook . "There are scientific phenomenos before it happens I anticipated it after 11 pm. Sometimes heat gas like water vapor comes out from the soil and there also seems that the oxygen level decreases."

Brand Ambassador of Forest and Environment department of Assam, Ananda Khataniiyar said, "As I work towards conservation of flora and fauna I observed Sasanka's inquisitiveness and his keen observation of flora and fauna perhaps he had made certain observations before such predictions." "He also helped me a lot in Environment awareness programme including plantation drives." He added.

Assamese Actor Rajkumar Talukdar,  said, "Sasanka has always been unique in his journalistic endeavours as he does background study while preparing news reports,so I think he has some kind of sixth sense as he often makes wild predictions even in cricket matches which turns out to be true.
Pertinently, Talukdar is a journalist with an English Daily, and also reports for a regional English satellite channel 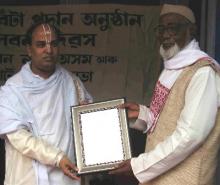 21 Apr 2018 - 7:54pm | AT News
Kokrajhar:: The police have arrested eight persons a day after killed a person and injured a woman in the name of witch hunting incidents in Chirang and Baska districts sending statewide shock and...