Guwahati: The mortal remains of Tarun Gogoi consigned to the flames on Thursday three days after the former Chief Minister died of post COV19 complications at the Guwahati Medical College Hospital.

Gogoi’s son and Lok Sabha MP from Kaliabor Gaurav Gogoi lit the pyre according to the Vedic rituals at the Savagraha Public Crematorium at 1 in the afternoon. Chief Minister Sarbananda Sonowal, his cabinet colleagues along with many senior politicians and prominent citizens were present.

People thronged in thousands on both sides of the RG Baruah Road as funeral procession proceeded from Dispur to Navagraha Public Crematorium.

Thousand others who came from the far flung areas gathered the public spots in the city to pay their last respect to the most revered peoples’ leader as the body was taken with a procession from Sankardev Kalakhetra to the cremation ground. Floral tributes were made at churches, temples and mosques on his body on the way across the city.

The administration facilitated thousands others to watch the cremation formalities at Chandmari Field on a screen since the cremation ground had the capacity to accommodate only 1000 people. At 9 in the morning his body was taken to his official residence to complete religious formalities by the family members.

30 Jul 2009 - 10:47am | editor
Eminent scholar of Assam, Dr Sivanath Barman will attend the ‘Guest of the Month’ program of Guwahati Press Club (GPC) on August 1. The interactive program will begin at 2 pm. Retired... 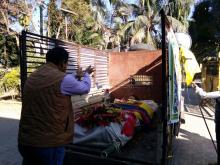 Workshop on "Science, Engineering and Technology for Sustainable Development" at GIMT Tezpur

1 Dec 2019 - 10:57am | AT News
Tezpur: Girijananda Chowdhury Institute of Management and Technology (GIMT), situated at Dekargaon, Tezpur is organizing a three day workshop on ‘Science, Engineering and Technology for Sustainable...