India’s North East is the geopolitical part covered by China, Bhutan, Myanmar, and Bangladesh. The insurgency has a long-rooted historical background of this specific region of India. This region has a rich cultural population with diversified portrait mostly directly rooted in the wild form of mother nature. As such, those who are not rooted in the atmosphere of the region for them it is more difficult to understand. Culture when directly rooted in a virgin form of nature then automatically an act of preservation and conservation comes. Whenever some idea comes which cannot be perceived by the human mind easily due to cultural upbringing then automatically conflicts come to the mind and at one stage when that seed of conflict gets outer environment for germination it comes out as tree of turmoil. Maybe this is one reason for the long historical background of this conflict in this region.

The region remembers the 1962 Chines aggression. Obviously, time is not the same as earlier and India is now having the largest military power. But, the issue of insurgency is something different. Here, that uprising comes out from the womb of the same mother. If the economy and culture can not walk together and there is a conflict between twos, then the idea of peace may be a blunder in the near future.

Union of India should understand the basic idea of market absorption in creating spaces within and outside the three pillars of Indian democracy in this region wholeheartedly and if fail to do so it may be a diplomatic mistake. Recruiting agencies should be honest and free from nepotism in making recruitments in three pillars acting in the region otherwise lack of competency and honesty may destroy the whole idea of oneness and leave the space to an unseen turmoil. It is settled theory that it is good in wartime or in an emergency to hear the truth than appeasement.  Truth sounds bitter but it gives sound health.

The war scenario of the entire globe is changing. The internal security management is not enough within the ambit of traditional security management. Rather, the Government should move one step forward in the engagement of people in the decision making process, implementation process with a fast track disposal procedure. Culture, economics, and polity when in coordination moves then a sustainable result can be expected. Here, India’s North East is……………..

5 Jun 2011 - 3:54am | editor
People have reposed faith on Gogoi government. This has forced Dispur to think of recruitment in the various departments. Education department is set to get the maximum score where over 30,000... 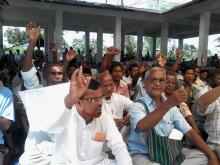 29 Sep 2015 - 3:42pm | Hantigiri Narzary
Gaonburahs from Chirang and Kokrajhar staged dharna on Tuesday demanding appointment of gaonburahs in the districts in front of DC office in Kokrajhar.The dharna was organised by All BTAD...

8 Nov 2017 - 8:44pm | AT News
A special court in Guwahati has remanded 12 ACS, APS and allied service officers to 14 days police custody hours after they were arrested charging them with resorting to forgery in the state civil...