Actor Urmila Mahanta will be sharing the screen with Manoj Bajpayee  in her upcoming release ‘Dial 100,’ directed by Rensil D’Silva. A Zee5 original movie premiering on the platform from  - August 6, the film also stars Neena Gupta and Sakshi Tanwar in the lead.

While sharing her experience with Manoj Bajpayee Urmila says “Manoj Bajpayee is a thorough gentleman! Very  down to earth and quite supportive . We talked a lot on the set regarding films , acting & of course about my native Assam “. She further ads “when I told him I met him before  and  received ‘Best Actress Award “in his hands in Patna international Film Festival he could recollect and our bonding strengthen.

The actor excitedly recollects her debut experience in Bollywood “ I consider myself fortunate to share screen with India’s one of the most talented actor Nawazuddin Siddiqui in my first film “ Manjhi, the Mountain Man by Ketan Mehta which was nothing but a truly learning experience from all stalwarts of the industry “

Dial 100  by Sony Pictures will be premiered tomorrow on Zee5 and the film was mainly shot in different parts of Mumbai like Tardeo, Grant Road and Suburban locations.

The actor is quite elated to play the role of a cop and exclaims “Playing a Cop in a film was a dream-cum-true moment for me. Finally I got the opportunity to realise my dream in Dial 100. I am extremely delighted and it was indeed a fulfilling experience for me”

It’s a Suspense Thriller which will have Worldwide release tomorrow.

“After Nawazuddin Siddiqui I am fortunate enough to get the chance to share screen with none other than Manoj Bajpayee”, concludes the actor on an elated note. 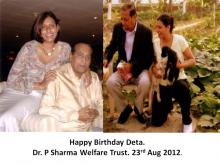 23 Aug 2012 - 9:17pm | editor
August is a month that I miss Deta the most. Although he passed away in the month of July, I always find myself thinking about him more frequently at this time of the year. However, that’s not...

8 Jan 2016 - 6:22pm | AT News
The civil society groups and media persons on Friday paid rich tributes  to Bhesaj Ratna Dr Gunaram Khanikar, who left for heavenly abode on early morning of 7 January 2016. The Guwahatians in a...

1 Dec 2014 - 11:33am | editor
The Assam Government will confer Sukapha award to noted lawyer KN Saikia on Tuesday. The former Supreme Court judge will receive the award from chief minister Tarun Gogoi at a function at Rabindra...