The much-acclaimed Assamese documentary film on the country’s first female commando unit ­– ‘Veerangana’, was screened to much praise and appreciation at the Gagan Chandra Adhikari auditorium of the 33rd Guwahati Book Fair on January 6, 2021. On the occasion, the film’s poster was unveiled by the prominent actress of Assamese cinema Mridula Baruah and Bhaskar Jyoti Mahanta, IPS, Director General of Assam Police.

The distribution of mementos in appreciation to the unit members of ‘Veerangana’ was followed by an intimate discourse with members of the Veerangana unit. 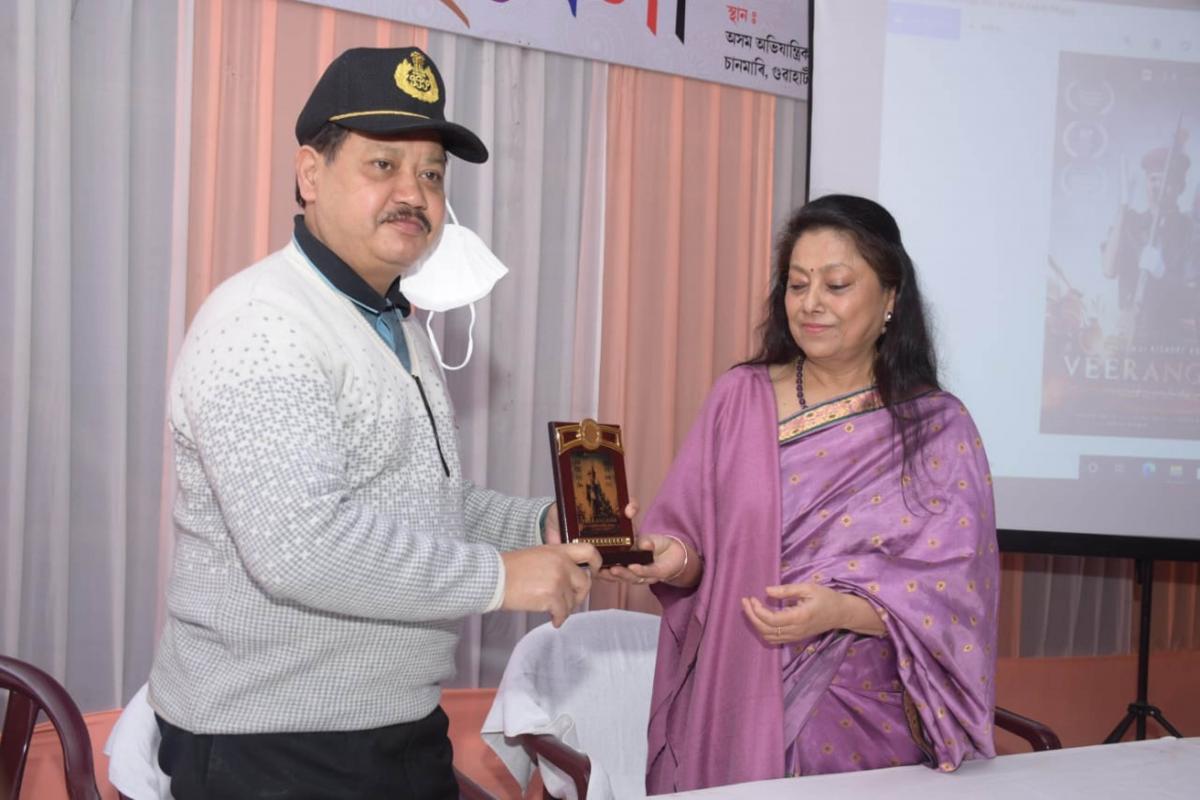 A significant impact has been made on having a unit that would be significantly aggressive, to deal with people that are committing crimes, especially crimes against women. The Veerangana squad of Assam Police will soon undergo a complete makeover. Bhaskar Jyoti Mahanta, in his key-note speech, spoke about making the unit more aggressive and mean by pushing through a number of progressive reforms. Mridula Baruah showered praises on the Veerangana members for their exemplary courage and service to the society, in her speech.

The 21-minute documentary is based on the far-reaching role of the Veerangana team of Assam Police, which was formed as a special women force for protection of women working in the city. It portrays various activities of the female commando unit and their role in effectively dealing with crime against women in Guwahati.

With their keen understanding of the environment that they work in and the challenges that go with it, the Veeranganas have provided women that much more confidence to go out anywhere and anytime they want. The Veerangana unit has become a huge role-model to women in Assam and the North-East.

The documentary projects the entire concept along with some personal details of the working Veeranganas.

A city-based cultural activist, Kishore Kalita, who made this documentary film under the banner of SK Production, and in the fond memory of his father S.C Kalita, has dedicated it to the Assam Police. ‘Veerangana’s screenplay is written by Utpal Datta, camerawork executed by Nagen Baishya, editing is by Diganta Borah, music and sound designing is by Abhijit Barman, while Ambarish Barkataky is its colourist and subtitles are written by Prantik Deka. The title song in the documentary is rendered by popular singer Zublee Baruah.

31 Dec 2011 - 3:38am | editor
Lakhim and Dhemaji districts are set to heave a sigh of relief. KMSS, AJYCP, TMPK have called off the big dam blockade from Saturday. Addressing a press conference in Lakhimpur on Friday, KMSS...

7 Nov 2015 - 4:15pm | Hantigiri Narzary
Preparation has completed so far to host the16th edition Bodoland Martyrs Gold Cup football championship 2015 from November 8 here at KDSA ground in Kokrajhar. The championship has been organised by...

6 Jun 2017 - 11:51pm | editor
Amid an escalating controversy over beef consumption, yet another leader has quit BJP in Meghalaya suggesting a setback for the saffron party in the pre poll political landscape.  North Garo...